The Opioid Epidemic in America

Home » The Opioid Epidemic in America

The Opioid Epidemic in America 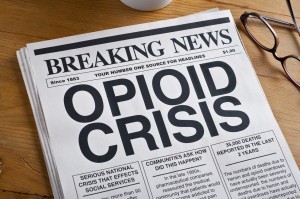 Everyone is talking about it. In America, it can seem like everywhere you turn, there’s another tragic news story about the death and devastation brought on by an opioid epidemic in this country. While deaths are skyrocketing lately due to easy access to opiates, there has been a dark side to these pain-killing substances throughout American history. This latest epidemic is but one in a series of troubling periods of human suffering and death in America resulting from the abuse of opiates, going as far back as the arrival of the Mayflower in the 1620’s1.

History and Prevalence of Opiates

Opiate use and addiction is nothing new in America.  It goes as far back as the Pilgrims, who brought over a substance known then as laudanum; a substance derived from the opium in poppy plants. Since then, opiates have been commonplace in medical care due to their potent pain-relieving properties. Beginning in the 19th century, most opiates became controlled substances at the federal level, although the drugs remained in common usage both medically and recreationally. In the ’60s and ’70s, there was a resurgence of opiate addiction as new synthetic opioids began to enter the market and, later, as a result of heavy illegal heroin importation from Asia.

Opiate addiction is currently considered by many experts to be at epidemic levels. An estimated 30 million people abuse opiates worldwide, with approximately 2.1 million addicts living within the U.S. As a result of a recent growing number of users, overdose deaths are surging, having quadrupled since 19992. This surge in opiate use and overdose affects many sectors of our population, especially adolescents and women. In young people, this surge is often attributed to the volume of prescriptions being written for opioids, nearly doubling over the past decade. Women are far more likely to be prescribed pain relievers in higher doses and they tend to use them for longer periods than men. 48,000 women died of prescription pain reliever overdoses in the past decade3.

Outward Symptoms of Opiate Use

Opiate addiction is often a highly visible condition and includes patterns of both physical symptoms and aberrant behavior which are easily detected. Physical symptoms include:

When people begin to abuse opiates, there are also a number of changes in the way they act. In order for addicts to continue to stay high and support their habit, they will likely begin to engage in any of the following behaviors:

Typical Cost to the Opioid Addict

When measuring the total “cost” of opiate addiction, it doesn’t do to simply count up how much opiates cost a person to buy. While supporting an opiate habit is expensive and can cause addicts extensive problems due to this alone, the price of addiction costs much more than money.

While an addict still has a prescription, most opiates are relatively inexpensive. Once they begin abusing them beyond the scope of a doctor’s supervision, however, the street price causes the drug’s price to jump up significantly. On the street, an addict’s supply can go up by 10-13 times4. For drugs that can cost $40-100 per bottle with a prescription, these pills rapidly become unaffordable. As a result, many addicts will switch to the more dangerous heroin, which, while still costly, can be purchased for much less, closer to $20 per dose5.

Effect of Opiates on the Addict

Opiates are very strong drugs and should never be administered without the consultation and advice of a professional physician. Once an addict begins to self-medicate with opiates, the impact of these drugs can be extremely dangerous. When an opiate addict is inebriated, the primary effects will be a sensation of profound calm and euphoria, along with insensitivity to pain, sleepiness, and a slowed respiratory system6.

Opiates also affect the brain. One of the primary actions of opiate painkillers (and heroin) is to prevent the brain from releasing a naturally occurring chemical called GABA. This chemical is responsible for controlling the flow of dopamine (the pleasure signal) and, when it can flow uninhibited, it creates the powerful rush of euphoria for which opiates are known. On the other side of this, particularly after prolonged periods of addiction, this begins to change the brain chemistry and can lead to issues like depression and other mood disorders.

When an opiate addict reaches the chronic stage of their addiction, risks become increasingly significant. Users may begin to experience agitating symptoms like muscle spasms, cardiovascular problems (heart attacks, etc.), and even death7. Opiates are the leading cause of overdose in the United States, with more people dying from opiates than any other drug.

Permanence and Relapse of Opioid Use

Like most addictive drugs, opiate addictions can be incredibly difficult to treat. In the case of opiate addicts specifically, more than 90% of them can be expected to experience at least one relapse during the course of recovery. Most of these relapses occur early on in the recovery process, but, as the addiction is typically lifelong, relapses can occur at any point in a person’s life.

Relapse in opiate recovery can usually be traced to any number of causes. Addicts have altered and damaged what is called the mesolimbic system of the brain. This center of the brain is responsible for pleasure and reward. As opiates warp this area of the brain, most addicts will find that they need the drug to experience any kind of pleasure or well-being at all. Without the drug, they suffer from an ongoing sense of depression or anxiety. Although this damage can be overcome and an addict can one day resume a more or less normal life, undoing this impact takes a great deal of time and effort.8.

In order for opiate addicts to recover, most of them require a long period of controlled separation from their drug of choice. This can occur within a hospital or a dedicated rehab facility and can be considered necessary for the intense cravings of early recovery to subside. After this, most addicts find that therapeutic sessions, 12-step programs, and religious programs can be very helpful.

Opiate withdrawal is a well-documented phenomenon and is the stuff of legends and nightmares among the addict community. The severity and length of such a withdrawal period depend upon the length of an addict’s using history and the quantities they were using.

Some addicts will attempt to detox in their own homes. This can sometimes be done safely, although the pain is likely to be greater in such a setting and they run a much greater risk of giving in to the intense cravings to use. Medical settings offer other advantages, namely opiate detox drugs (e.g. methadone, suboxone, etc.) which can moderate some of the withdrawal symptoms and prevent some of the cravings9.

Physical and Mental Difficulty of Recovery from Opiates

Recovering from most severely addictive drugs, like opiates, is a long and difficult road. Once the opiate addict is clear of the initial phase of withdrawal and detox, they will almost always require a great deal of recovery and support thereafter.

Relapse rates for opiate users are very high. Throughout much of their early recovery, most addicts will experience overwhelming cravings which become nearly impossible to ignore on their own. To ease this, some opiate recoveries include a tapering protocol during which addicts will use diminishing doses of methadone, buprenorphine, naltrexone, or naloxone. These drugs reduce an addict’s cravings without producing the euphoric and debilitating high of opiates themselves.

Therapy and support form the other essential components of a comprehensive recovery plan. Depending upon the person, the recovery center or group which aids them, and the intensity of their addiction, therapy, and support plans will differ. Some addicts will gravitate towards 12-step groups, while others may prefer a religious program. Regardless of how an addict goes about this phase of their recovery, it is essential that they get down to the underlying causes of their addiction and its supportive behaviors. Once they have done so, they can begin to make substantial changes to the way they look at the world and the place they occupy in their community.

President Trump declared the opioid crisis to be “a public health emergency” at a White House ceremony on Oct. 26, 2017. What remains to be seen is whether that declaration will mobilize the money needed – billions of dollars – to blunt the epidemic.

In August, the president promised to officially declare a “national emergency” on opioids. That designation would have treated the drug epidemic as we do extreme hurricanes or other natural disasters – triggering emergency funds and manpower from the Federal Emergency Management Agency (FEMA).

What President Trump did instead – declare a “public health emergency” – was more tailored to the opioid crisis, according to Administration officials. The White House says it will work with Congress to increase federal funds for addiction recovery and redirect existing grants to better fight the epidemic.

Senior officials also said they will expand access to telemedicine so that doctors can treat more patients in rural areas, and launch an ad campaign to convince young people not to try opioids. Other steps include making it easier for addiction professionals to be hired and requiring training in safe opioid prescribing practices.

1 The Guardian. “The strange history of opiates in America: from morphine for kids to heroin for soldiers”. James Nevius. March 15, 2016. www.theguardian.com/commentisfree/2016/mar/15/long-opiate-use-history-america-latest-epidemic

7 DrugAbuse.com. “The Effects of Painkiller Use”. Eric Patterson. drugabuse.com/library/the-effects-of-painkiller-use/

The Opioid Epidemic in America - Information by American Rehab Centers